Alejandro Murguía is the author of Southern Front and This War Called Love (both winners of the American Book Award). His non-fiction book The Medicine of Memory highlights the Mission District in the 1970s during the Nicaraguan Solidarity movement. He is a founding member and the first director of The Mission Cultural Center. He was a founder of The Roque Dalton Cultural Brigade, and co-editor of Volcán: Poetry From Central America. Currently he is a professor in Latina Latino Studies at San Francisco State University. He is the author of the short story “The Other Barrio” which first appeared in the anthology San Francisco Noir and recently filmed in the street of the Mission District. In poetry he has published Spare Poems, and this year a new collection Native Tongue. He is the Sixth San Francisco Poet Laureate and the first Latino poet to hold the position.

Sandra García Rivera’s work has appeared in numerous journals and anthologies including Caribbean Erotic (Leeds, UK), Breaking Ground: Anthology of Puerto Rican Women Writers in New York 1980-2012 , Centro Journal, Hostos Review/Revista Hostosiana, and Urban Latino Magazine. She has published two chapbooks: Divination of the Mistress, and Shoulder High, and two editions of hand-made books for her poem That Kiss (Ediciones Mixta, NYC). In 2001 she travelled to Cuba for the Writers of the Americas Conference, working with writers Junot Diaz, Jack Agüeros, and Danny Hoch. She is currently a teaching artist with SF WritersCorps, and the host and curator of Lunada Literary Lounge at Galería de la Raza. She has been a guest poet/mentor with June Jordan’s Poetry for the People Program at UC Berkeley, and holds an MFA in Poetry from Antioch University.

A Queer Xicano writer of Rarámuri descent, Lorenzo Herrera y Lozano is the author of the Lambda Literary Award-nominated Santo de la Pata Alzada: Poems from the Queer/Xicano/Positive Pen (Evelyn Street Press, 2005) and Amorcito Maricón (Kórima Press, 2014). Along with Adelina Anthony and Dino Foxx, Lorenzo is a co-author of Tragic Bitches: An Experiment in Queer Xicana & Xicano Performance Poetry (Kórima Press, 2011), and the editor of Queer Codex: Chile Love. His work appears in several anthologies and journals. , as well as the journals. Lorenzo holds a Masters in Liberal Arts from St. Edward’s University.

Lito Sandoval is a long-time San Francisco Mission District resident. He was a co-founding member of the queer Latino comedy troupe Latin Hustle, and co-wrote and co-starred in their first stage production Full Frontal Rudity. He also appeared in the short film Corn in the Front Yard. His work has been seen in various zines and journals including Prosodia, Xipactli, Whorezine, A la Brava and Holy Titclamps. His short story “I Love You Alto” can be found in the anthology Virgins, Guerrillas y Locas: Gay Latinos Writing About Love.

Harold Terezón, from Pacoima, CA, recently was awarded San Francisco Foundation’s James D. Phelan Award in poetry. He is writing his first manuscript Hunting Izotes, a poetry collection based on his family’s immigrant experiences. As a Teaching Artist with WritersCorps, harold teaches poetry to elementary and middle school students in San Francisco, CA. 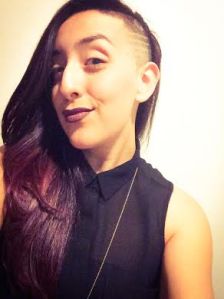 Denise Benavides is a San Diego native poet and performer currently residing in Oakland, CA. Her writing has been published in FatCity Review, Ground Protest Poetry, The Far East: Everything As It Is, and The Acorn Review.

Avotcja (pronounced Avacha) is a card carrying New York born Music fanatic/sound junkie & is on a shamelessly Spirit driven melodic mission to heal herself. Avotcja talks to the Trees & listens to the Wind against the concrete & when they answer it usually winds up in a Poem or Short Story. Avotcja has been published in English & Spanglish, Spanish in the USA, Mexico & Europe. She’s an award winning Poet & multi-instrumentalist & a popular Bay Area DJ & Radio Personality & leader of the group “Avotcja & Modúpue” (The Bay Area Blues Society’s Jazz Group Of The Year in 2005 & 2010). Avotcja teaches Creative Writing & Drama & is a proud member of DAMO (Disability Advocates Of Minorities Org.), PEN Oakland, California Poets In The Schools, IWWG & an ASCAP recording artist. Newest book “With Every Step I Take” Poetry & Short Stories by Avotcja with Artwork by Eliza Shefler (Taurean Horn Press 2013) is available @ Amazon.

Jaime Cortez is a writer, visual artist, and longtime student of comic books. His art has been exhibited across the Bay Area at venues that include the Berkeley Art Museum, Oakland Museum of California, Intersection for the Arts, Yerba Buena Center for the Arts, and Galería de la Raza. His short stories have been published in over a dozen anthologies including “KinderGarde – Avant Garde Writing For Children” edited by Dana Teen Lomax and “Why are Faggots So Afraid of Faggots?” edited by Mattilda Bernstein Sycamore.

Fish Vargas is a Bronx born Nuyorican poet. He has been a featured performer at venues all over the country and In 2004 he claimed victory against 34 slam masters competing on a national level. He is a founding member Acentos Bronx Poetry Showcase based in the Mott Haven section of the Bronx. He is the co-host of louder Monday at Bar 13. He also is a member of the LouderARTS Project Artist organization. He facilitates workshops for the Osborne Association/Freshstart Program at Rikers Island teaching inmates creative writing and poetry for 3 years running. He is currently being published in the upcoming PSI 2004 Slam anthology and Fear of a Brown Nation.

Leo is a California-based writer and artist, native to the Bay Area. He is the Berkeley Poetry Slam Grand Champion of 2010. He earned a second Grand Slam title in 2012 and has competed nationally for 3 consecutive years. He has shared his work on stages across the country, including the McGlohon Theatre, and the Great American Music Hall in San Francisco. Leo facilitates at-risk youth workshops focused on constructive emotional release and self expression through writing.

Estela de la Cruz is a poet living in San Francisco. She has been a featured reader and read open mic in the Bay Area since the mid 1990’s, and had a poem published in Ishmael Reed’s Konch Magazine. She will be a featured reader at Galeria de la Raza’s Lunada on April 14 in celebration of her self-published chapbook, For the Hell of it. “I’ve read sporadically,” she says, “and kept mostly to the shadows, but I’ve reached a point in my life where I want my poems to have more light. Hence, my chapbook and stepping up to the mic more often these days.”

Dylan Amaro-McIntyre teacher, occasional fire stopper, writer, and performer. Graduating from SFSU in 2011 with degrees in both Creative Writing and La Raza Studies, Dylan has been published in various literary magazines, both in print and online, and has read at the De Young museum, the Galería de La Raza, and the Berkeley Poetry Slam.

Maya Chinchilla is a writer, video artist, educator and author of “The Cha Cha Files: A Chapina Poética” ( Kórima Press June 2014). Maya holds an MFA in English and Creative Writing and has presented her solo work and as part of collaborations across the country. Her work has been quoted (and misquoted) in essays, presentations and books particularly on themes of US Central American poetics, Chicana/Latina Lit, gender, and sexuality.She is also founding member of the performance group Las Manas and has co-edited Desde El Epicentro: An anthology of Central American Poetry. Born and raised in Long Beach by a mixed class, mixed race, immigrant and extended activist family; she has lived and loved in the Bay Area for the second half of her life. For more information http://www.mayachapina.com

Guillermo Gómez-Peña is a performance artist, writer, activist, radical pedagogue and director of the performance troupe La Pocha Nostra. Born in Mexico City, he moved to the US in 1978. His performance work and 10 books have contributed to the debates on cultural diversity, border culture and US-Mexico relations. His art work has been presented at over eight hundred venues across the US, Canada, Latin America, Europe, Russia, South Africa and Australia. A MacArthur Fellow, Bessie and American Book Award winner, he is a regular contributor for newspapers and magazines in the US, Mexico, and Europe and a contributing editor to The Drama Review (NYU-MIT). Gómez-Peña is a Senior Fellow in the Hemispheric Institute Institute of performance and Politics and a Patron for the London-based Live Art Development Agency. In 2012 he was named Samuel Hoi Fellow by USA Artists and this year received the Fleishhacker Foundation’s Eureka Fellowship and Achy Obejas.

Christina Perez is a Latina Slam/Performance Poet. Her work is sometimes bilingual, self-exposing, and she hopes, connecting. Christina Hosts a slam for youth in Mendocino County, she teaches workshops for at risk youth in Mendocino County. Sponsored in part by The Youth Project and the Mendocino Coast Writers Conference. Christina is the Director for “SLAMAZON” . Participation is for those that live their lives as women. Men welcome to attend as allies. She is a Poetry Out Loud Teacher <poetryoutloud.org> for Santa Rosa, Elsie Allen, and Rancho Cotati High Schools in Sonoma County.

Gabriel’s poetry has been featured on Upworthy and the Huffington Post and he has performed in such venues as the Nourse Auditorium and Zellerbach Hall. His work is also currently published in the second edition of “Rapsodia Antillana, Selección de Poesía Afroantillana de Panamá” (2014). Gabriel represented UC Berkeley at the 2010, 2011 and 2012 College Union Poetry Slam Invitationals (CUPSI). In 2012, his team placed third in the nation. In 2013, Gabriel co-coached the CalSLAM team.

Kay Nilsson is a miami-boy poet perfomer trying to process life through words, cause therapy is expensive. He is currently attending the University of San Francisco, attempting to minor in Perfect Black Beans, trying to figure out how recreate their family recipes to cure diasporic angst.

Tomas Moniz is the founder, editor, and writer for the award winning zine, book and now magazine: Rad Dad. He just released a novella Bellies and Buffalos which is a tender, chaotic road trip about friendship, family and Flamin’ Hot Cheetos. He is co-founder and co-host of the successful monthly reading series Lyrics and Dirges as well as the more rambunctious open mic, Saturday Night Special. He’s been making zines since the late nineties, and his most current zines Dirty and The Body is a Wild Wild Thing are available, but you have to write him a postcard: PO Box 3555, Berkeley CA 94703.

MK Chavez is the author of Virgin Eyes (Zeitgeist Press), Visitation, Next Exit #9 (with John Sweet) and Pinnacle (Kendra Steiner Editions). You can find her recent and upcoming work in Generations, 1611, and Zone 3. She has been a fellow at Squaw Valley Writers Conference, Antioch Writers Workshop and VONA. She has been the editor of Mill’s College Award winning journal The Walrus, Cherry Bleeds Literary Journal and the Milvia Street Journal. She is co-founder and co-curator of the Berkeley based monthly reading series Lyrics & Dirges and co-organizer of the Berkeley Poetry Festival.

Sarah C. Jiménez is a graduate student at Mills College, receiving a Master of Fine Arts in Creative Writing. Originally from Chula Vista, San Diego’s border-town to Tijuana, she has been living in San Francisco for over ten years. Jiménez is a Program Specialist at Mission Girls, a community organization that targets the growth and development of young Latinas. Her vision in life can easily be summed up in a James Baldwin quote: “I want to be an honest man and a good writer.”